Text on a Graphics Display

Whenever possible I like to write my own code instead of using a library (at first). It's a challenging puzzle and often times I learn how to do something useful as well. Most recently I got a 128x64px LCD to use with an Arduino micro-controller, the display could show graphics but its built in text mode was very limited, so after getting the graphics mode running I set about building a way to turn strings into text on my display.

My basic plan was to store a bitmap of each letter and its width in an array so that I could look it up and read it back as x/y pixel locations. In order to keep my program as small as possible I had to choose the type of data I used to store the letters so that there would be very little wasted space while also being easy to maintain and update, eventually I settled on storing each letter as a 32bit integer.

The letters would have a maximum size of 5x5px, this would use 25bits, leaving 7bits for storing extra data about the letter. Initially, I used the first 4bits to store the letter's width, the next 25bits would hold the letter data and finally there would be 3 zeros at the end. The letter "A" for example would look like this:

Or for better readability:

Unfortunately for me, C/C++ doesn't allow integers to be expressed in binary format if they are longer than 8 bits so I had to write a small program using Processing.org to scrape all the strings of ones ans zeros from a text file and then convert them into integers so my final value for storing the letter "A" ended up being 464332680.

Afterwards I pass the letter's width back to the string handling function so that I leave the appropriate amount of space between the letter I just printed and the one that comes next. Once this was working I used one of the three trailing zeros to indicate if the letter was a lowercase that needed to descend below the normally lowest pixel. The results are satisfactory given the small size of the display. 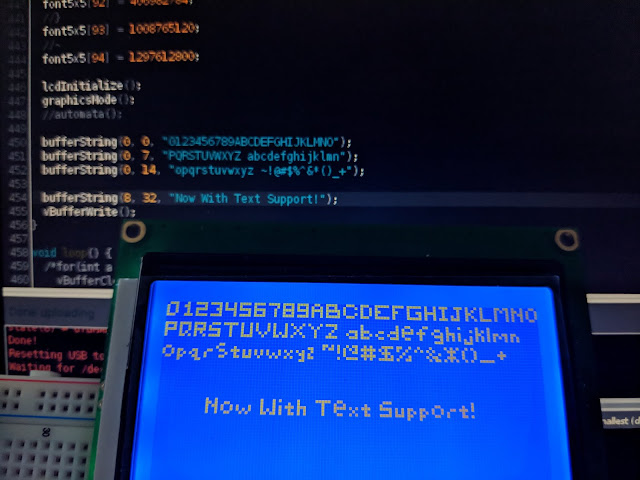